By Tim at 8:14 PM
I don't think I could have let the day go by without saying something about a new insulin delivery system I am starting. Today was the first "official" day of using the Omnipod system, with real insulin. I had been using it with sterile saline. Its a little complicated at first because you have to figure out what your basal rate is, which is the rate of insulin you will have delivered around the clock. Initially my doctor and diabetic educator are starting me off slow with higher than normal blood glucose levels to help avoid having any lows. The pod itself is controlled by a PDM (Personal Diabetic Manager device) really a PDA. It operates wirelessly and tubelessly... You can go to this video link to see a demonstration on youtube.

Joy, my educator has been so nice, and just called to check on me and it's a little after 9pm. Who could ask for better care? She will continue to check on me over the next few days until we get the basal rate right and are fairly certain I will avoid having any lows.

Anyone who is contemplating going on an insulin pump, should really consider the Omnipod, its fairly easy to set up, use, and you can build so much into the PDM including temporary basal rates, deliver bolus doses of insulin, it has a built in glucometer and the best thing is you can virtually do away with your syringes and injecting yourself 4-5 times a day. I anticipate that it will help me manage my blood glucose levels better and ultimately provide a longer and better quality of life!
No comments:

By Tim at 8:18 PM
It's not often I post my opinion about much going on in the world, because I steer away from most political discussions or politically driven situations, etc. However, I am very concerned as I watched and listened to President Bush this evening discuss this potential $700 billion bailout plan proposed to congress. What I hear is that we have been gluttonous consumers living beyond our means and making other's rich, filthy, disgustingly rich because of it. Surely the price we have paid is much greater than the balance on our mortgages, or auto loans. I think about our freedom, and wonder what other rights we have handed over during the last several years of what many thought was "prosperity"... In the morning I drive by a very large patch of brown, dead grass amid lush green, manicured and meticulously managed landscaping in the median no doubt. South Charlotte, a beautiful place to live and be, if you are wealthy. There stands a sign in the midst of the dead grass that says "Turf renovation in progress"... and not far down the street another sign that says something to the effect that the water used for irrigation of the lawn comes from a private supply. On my way home this afternoon I passed 4 fuel stations all without fuel, and finally the one I found was jam packed with motorists waiting to fill their cars.

Do you honestly think if the government forks over $700 billion dollars to bail out this economy, there isn't a price to pay? As if we haven't already paid - considering this money is the money they have taken from the hours we have labored day in an day out... the money use to fund program healthcare programs, pay for illegal immigrant services, etc, etc.

Who will you answer to when the government in every sense of the word "owns" your home?

Maybe a complete financial collapse would be a good thing, and no longer will we be so concerned over the "turf" that needs "renovating" - if people lost their jobs, would it make us turn to family again like it was in days gone by, would people pull their resources together, open their hearts and homes again and really understand what a hard day's work is really about? Would we learn to live without all the toys we have so feverishly coveted, purchased, and wasted our time and energy on... would we finally realize what's important?

I hardly think its a good idea. And I hardly think the American people, myself included will benefit it from it at all.
No comments:

Weekend with Family and Friends

By Tim at 1:32 PM
I decided to head home this weekend to visit family and take care of a few things with a home I own in Greenville.

The day yesterday was spent driving from Charlotte and a short layover in Raleigh to have lunch with a good friend. It was nice. Then I met my dad and his wife for dinner and called it a day/night.

This morning I was up and met Tiffany for brunch at IHOP and headed over to the house to check out a few things and speak to the tenants... I just put the home on the market and hope to have it sold before the end of November. 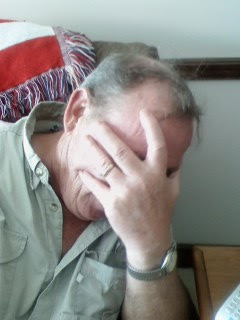 Anyway, thats the latest. My dad being the comedian he is, joked about taking a picture of his big toe and this is what I ended up with...

Until Next Time!
No comments:

Tribute to "Nell" with Jodie Foster

By Tim at 5:56 PM
This clip from the movie "Nell" is one of my favorite scenes, in fact this movie is one of my favorites. Ever since the NDLE, I find myself drawn to certain books, places, people, and movies. With each one there seems to be a pivotal point, scene or just basic truth that lights up in my brain and it confirms or affirms why I was drawn to it. Sometimes its just a sentence, or word or overall theme. The court room scene shown here is one of those "truths" and ultimately why I know I had to see it. Other times I may have a dream and a word or idea appears in big glowing and bright letters as if to draw my attention to it's meaning. The last time I had a dream like this the word "Quigong" showed up. I never knew what this word was and interestingly enough a video I had ordered a few days prior to the dream, arrived and there was a section of the video/documentary that talked about Quigong. Needless to say I have much to learn about it. Enjoy the clip.