Pray for Your Enemies!

By Tim at 4:50 PM
Something happened between yesterday and today. I have prayed for radical faith, for growth, for a greater desire to learn, to know to seek Him, to be intimate with Him. This morning as like most mornings, I signed into facebook reviewed some posts here and there and found the image and message below. 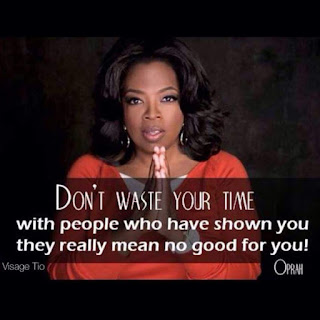 Its not the first time. I have seen it numerous times posted by many people, people who are Christians and who are not. I want to clarify here, I don't like the word Christian any more, as I am sure most non-christians don't. The people who profess to be one, are the very ones who give it all a bad bad name. Christianity today is far from what God and Jesus intended. It does not represent Christ or His teachings. In fact the word Christian almost is revolting and repulsive to me and I prefer not to be associated with. If anything I am attempting to be a follow of Christ. If you want to call that Christian so be it, but it looks nothing like "Christianity" today.

What if Christ thought the time He spent with sinners was a waste because they meant Him no good.  Who do you think He went to Calvary for?  Who do you think He died for?  Everytime we sin against Him, every time we reject someone, ridicule someone, make fun of someone, we do it to Him.    I am not sure Oprah endorses this picture or if she even said, but the fact she is associated with this message is no surprise.  This is the equivalent of the enemy's whisper in our ear.  "Look at her or him, they are nothing, they are less than you or me"....or "they don't deserve my prayers, they don't deserve this or that"... none of us deserve the very next breath in our body!  This subtle influence of the enemy through repeated postings or worse yet, our own mouths is the very thing the enemy uses to promote his own doctrine and theology.  If you really stop and think about it, and take the time to educate yourself on the scriptures and the very life of Jesus, then you will quickly realize this message is straight from hell although shared thousands of times on facebook by self proclaiming christians.  Certainly not followers of Christ, a HUGE difference as I have already pointed out.

Gosh, there are so many areas in my own life that is calling out for repentance, things I am not even aware of... and surely its so easy to see it in the lives of others.  I have been guilty of everything there is to be guilty of..

But I have such a longing in my spirit to see the True Church rise up and operate in the power and authority God intends. It starts with me, with each of us who share this longing!  I know without any doubt whatsoever that God is separating the wheat from the chaff, the sheep from the goats.  The clarity this will bring both to believers and non-believers alike will be so stark.  The world needs this and the need will grow exponentially in the weeks and months to come.

It is so unfortunate, that so many people who profess to be christians are so deeply deceived and influenced by the world, by the enemy.  We need and must speak truth into the lives of everyone around us.  This includes those who profess to be christians, even moreso than those who don't.  The deception among this group is far greater than those who are unchurched or have any frame of reference to religion. These are the people who will do the most damage, these are the ones if they continue to reject God and His truth by being complacent and the ones who depend on someone else for their so-called relationship with God, these will be the ones who will persecute, who will turn against us, and attempt to destroy us.  They have become the very tools of the enemy.

I have been guilty of this.  The road is getting so narrow, for me personally.  The time of being complacent will no longer keep us in the middle of the road, the middle is quickly disappearing and people must commit their lives to the pursuit of God, His righteousness, His holiness.  We must seek the Kingdom of God in our own lives.  We must have a relationship with Him that no one else enters into.  Not our friends, our family, our jobs, our own ideas and intellect.  He must be number one! Above all things, all people, all circumstances!  It is through this relationship with Him alone, that all other relationships will prosper and grow.  It is through our relationship with Him alone, that all others will be renewed, restored, re-energized.

We must seek unity and not the kind of unity that is currently being perpetuated on the world's stage by the Pope and every mainstream religion that exists.  We need unity of spirit, God's Holy Spirit, unity of purpose, His purposes.  We cannot continue to get caught up on what each other doesn't understand or know about this passage or that, we must pursue God.  He will reveal His Truth to us, each individually and collectively.  We cannot continue to sow discord among ourselves.  We stand on shaky ground if we do.

I can't tell you how many times I have seen the message above and many like it,  flood the internet, its sad really. If we can't forgive someone for something and therefore make them irrelevant (not loving your enemies) then it wouldn't surprise me if we become irrelevant to God. Something to think about. All these lies from the enemy pisses me off!

When we have God who is for us then who can be against us and who really cares if they are? It has no value in God's eyes, except that we do as He commanded toward them. These kinds of messages appeal to the sinful nature, the carnal nature, the nature that opposes God and what He stands for.

Romans 12:18-20 If possible, so far as it depends on you, be at peace with all men. 19Never take your own revenge, beloved, but leave room for the wrath of God, for it is written, "VENGEANCE IS MINE, I WILL REPAY," says the Lord. 20"BUT IF YOUR ENEMY IS HUNGRY, FEED HIM, AND IF HE IS THIRSTY, GIVE HIM A DRINK; FOR IN SO DOING YOU WILL HEAP BURNING COALS ON HIS HEAD."Matthew 5:43-45 43 You have heard that it was said, 'YOU SHALL LOVE YOUR NEIGHBOR and hate your enemy.' 44"But I say to you, love your enemies and pray for those who persecute you, 45so that you may be sons of your Father who is in heaven; for He causes His sun to rise on the evil and the good, and sends rain on the righteous and the unrighteous. What Christ here commands and advises to, he himself did; for as he hung upon the cross, he prayed for his crucifiers, who were then using him in the most despiteful, as well as cruel manner; saying, "Father, forgive them, for they know not what they do": and in this he has left us an example, that we should tread in his steps; and here in he was quickly followed by his holy martyr Stephen; who, whilst he was being stoned, prayed for his persecutors and murderers, saying, "Lord, lay not this sin to their charge". This breathes out the true spirit of Christianity. Luke 6:28, Proverbs 19:11, Proverbs 25:21, John 13:34, Romans 12:14, Romans 12:20, 1 Thessalonians 5:15

We must repent of these things, we must!  If we cannot pray for our enemies how in the world do we expect to enlarge His territory, His kingdom?  We cannot pray for our enemies, those that hate us and persecute us, if we have NOT the love of the Father, and we have not that love because we don't know Him, we don't spend time in prayer with Him, we don't fast, we don't seek His face.  If He came that we might have life and have it more abundantly, then ought we do the same?  Should we not humble ourselves and allow God to circumcise our hearts, that we would be good stewards of His mercy and grace toward all who would accept it?  Surely we should!

I am learning to have the true favor of God, there must be persecution, ridicule, rejection, trials and tribulations - anything less might just make me comfortable, complacent and self-reliant, in a word, deceived. I can't think for a minute that true favor is what the world's gospel wants us to believe, a bigger better job, more money, a better or bigger home, even better health. I think of the favor Jesus had and as painful as it must have been, the greatest favor His Father gave to Him was the opportunity to die, to be the sacrifice, making the way for us all to have true life through Him. He had nothing, wanted nothing and sought nothing except to do the will of His Father and as result He had everything! The things of this world have no value - no amount of money, no position or power, no status or prestige, accolades or affirmation equate to the favor of God, only the favor of men. God strengthen your voice and your Spirit within me, that I would die and be hidden. Humble me that I would walk in your ways, delight in your precepts, statutes and commands! Move me into a deeper more intimate relationship with you in this coming year!